Today I’d like to talk a little bit about the morality of Disney movies. More specifically, for those who grew up like I did watching Walt Disney’s animated classics, I want to ask you. How have your views on them changed since you were a kid?

I ask because it occurred to me recently that mine have. This past weekend I was watching five of my children while my wife took one of our sons to the grocery store. Trying to work on my Statistics homework, I was looking for something good for my daughter to watch on Netflix. That’s when I noticed Moana was available to stream. Having not seen this newest Disney animated flick, I will confess. My reason for turning it on was only secondarily because Evelyn would enjoy it. For old times’ sake, I wanted to watch a new Disney movie.

So Evelyn and I – and gradually her older brothers as they trickled in – watched the tale of a young Polynesian girl who goes on a great adventure to save her people from certain destruction. With the help of the demigod Maui, Moana sails across the ocean. Together the two retrieve Maui’s magic hook, allowing Maui to shape-shift once more – an ability he lost 1,000-years ago when he was banished to an island for his mischief.

Together, Moana and Maui confront monsters. They brave storms. Moana learns to way-find from Maui. Lastly, Moana returns the heart of the goddess Te Fiti to her wrathful, demonic, volcanic form so she can once more become the verdant, pacific, benevolent green island she formerly was.

The Gospel According to Disney

And here is where I will make another confession. It was difficult focusing on my Statistics homework from the movie’s first scene to its last. The film’s visuals were vibrant, crisp, and colorful. The characters were charming and funny. The score was pleasant and chipper. The story made me feel like a kid again.

Yet something about it all bothered me, perhaps all the more for how sweet, innocent, and positive it seemed. And I don’t think it’s just me being a stick in the mud.

I read a book several years ago by Mark I. Pinsky titled The Gospel According to Disney. Through that book I realized that media designed for children can, despite seeming innocent, nevertheless carry subtle messages about life, the universe, and God. Read Walt Disney’s biography on the front-end, then re-watch films like Pinocchio, Snow White, Cinderella, and Bambi. You’ll see what I mean.

For starters, where are the parents in Disney films, especially the fathers? Why are fathers almost always either dead, absent, or crazy? Bambi, Oliver and Company, The Rescuers, Snow White, The Lion King, Jungle Book – if the child starring in the film isn’t a complete orphan at the start of the film, they typically are by the end. Why is that?

And where is God or the Christian faith in Disney’s fictional worlds? Where is any faith at all except for vaguely believing in ones’ self and following ones’ heart? 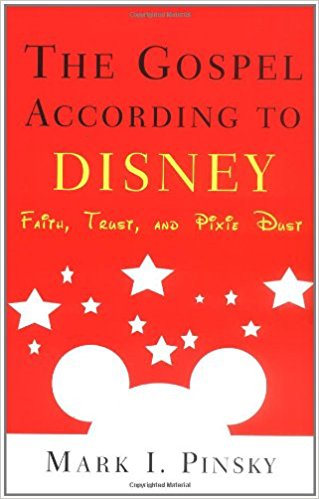 Don’t misunderstand me. There is often a strong and undeniable supernatural component in Disney movies. You can’t miss it. But rather than a divine God revealing his will and intervening in the affairs of man, Disney’s supernatural element is magic. And with only a handful of exceptions, magic in the Disney universe is portrayed as fundamentally good.

Fairy godmothers and wizards, Aladdin’s Genie and The Lion King’s Rafiki – all of these spiritual guides are mysteriously connected to a vague cosmic power which allows them to do things otherwise naturally impossible. Yet this power is never the God of Christianity as we know him.

Sometimes Disney magic is tied explicitly to other gods or goddesses. This is true in at least two cases I can think of: Hercules and Moana.

In Hercules and Moana, the heroes are demigods. Monsters associated with evil or malevolent deities must be defeated to restore cosmic order before everyone can live happily ever after again. Hercules must defeat the mastermind Hades – who is clearly demarcated as an evil ‘bad guy’ capriciously trying to get more power for himself, and sadistically enjoying the pain and terror he inflicts on others along the way. But by contrast, an odd and subtle shift in the classic good-versus-evil formula takes place in Moana. I think this is worth noting.

A Subtle But Significant Shift in Narrative

Moana’s villain at the start of the film – a demonic elemental creature angry that Maui has taken the heart of Te Fiti – is revealed to be merely misunderstood. She is Te Fiti. It was her heart that was stolen way back when by Maui, the film’s hero. All she needs is to be given back her heart to become calm and kind and nurturing again. In a coconut shell, Moana – this newest Disney princess – needs to appease an angry Polynesian deity to save her people.

Don’t miss this subtle but significant shift in narrative. Evil need not be defeated anymore. Indeed, once the goddess Te Fiti is satisfied, it is she who gives Maui back his magic hook which enables him to resume his shape-shifting and other daring feats, making him whole again.

Perhaps you’re wondering at this point ‘So what?’ It’s just a children’s story. Don’t ruin it! But of course, that’s what I thought too, especially when I myself was a child. And nostalgia for those childhood days could have me believing such things still. Only now I see very adult worldviews seeping through these stories. And it would be negligent not to comment on them once they are perceived.

What happens if a string of children’s films are produced over the next several years to drive this point home? Do we want our kids believing evil is just a big misunderstanding? Do we want our children persuaded malevolent deities just need to be appeased in order for us to live happy, healthy, prosperous lives?

The Morality of Disney Movies Gave Me Unrealistic Expectations

Consider the real-world implications for a moment. Suppose decades from now our children are still facing the same global threats we face now: an aggressive Russia bent on expansion; rogue states like Iran and North Korea threatening nuclear assaults on American cities; terrorist states like ISIS violently attacking civilians in seemingly every Western nation. Mark my words. Our children will lose these geopolitical struggles if they believe peace and victory are attained by giving evil what it wants.

And couldn’t these movies set our children up to believe anti-American sentiments like those Progressives articulate about terrorism? It’s not a far leap to make from blaming the likable hero Maui for Te Fiti’s wrath to blaming American power abroad for attacks by ISIS and al-Qaeda.

More to the point, what about the ongoing spiritual struggle inherent to the Christian worldview?

Starting in Genesis, God’s Word tells us there is an ongoing spiritual war taking place, both here on earth and in the heavenly realms. This war is not between friendly gods and goddesses. There is not one good side and another that’s merely unfriendly or misunderstood. Rather, the conflict is between the Creator God’s angels and the evil, rebellious, demonic forces at war with him. These evil, demonic beings are not disinterested in us, but bent on our destruction as a human race.

From the beginning, Satan’s goal has been to seduce humanity into believing we can become gods ourselves by submitting to him and following his instructions instead of placing our faith in God, worshiping and obeying him alone. To give him and his forces what they want is not the way to peace with God, but rather places us in the camp of the enemy.

What am I not saying?

What I am not saying is to stop letting your kids watch Disney movies or other similar fare. I am not saying there is nothing to learn from or enjoy about films like Moana. However, I would strongly urge you as parents, and as consumers of media yourselves, to not be ignorant of the subtle way creators and producers of media try to indoctrinate us and our children with the ideas and beliefs they want to see rule the world.

I know first-hand how tempting it is to blindly trust that Disney animated films are good and wholesome. They remind us of the kinder, gentler, simpler days of our own childhoods. And trying to start a mature discussion about them without feeling a bit sheepish is a challenge. Even now, I know some will dismiss me for getting old and ruining something innocent by overthinking it.

Yet that is not the path of wisdom. That is the path of willful ignorance. Whatever yours or my knee-jerk reaction to calls for greater attentiveness on this, I would strongly encourage you to become informed and active viewers rather than passive recipients like we once were when we were children.

And rather than avoiding films like Moana which carry subtle philosophical and theological messages, use them as opportunities to cultivate discernment and critical thinking skills in yourself and your children. Use them as springboards for important discussions about the nature of life, the universe, and God – the one, true, real Creator God of the Bible and the Christian faith.