Terrorist attacks rocked Manhattan, New Jersey, and Minnesota this past weekend. In response, Donald Trump’s son tweeted a straightforward Syrian Skittles analogy on Monday night. In it he compared admission of Syrian refugees when by all accounts some will be agents of ISIS to eating a handful of Skittles knowing two or three from the bowl are poisonous.

Not surprisingly, the hyper-manipulative, aggressive idiocy of the Left immediately kicked into overdrive. Progressives in the mainstream and on social media went nuts with feigned outrage over Trump Jr.’s tweet.

One such example of the response came from CAFE, a Tumblr account that apparently exists for the sole purpose of helping its self-impressed curators feel clever even as they mislead their followers. The following meme posted to their accounts serves as an apt summary of the Left’s social media response in times like this. 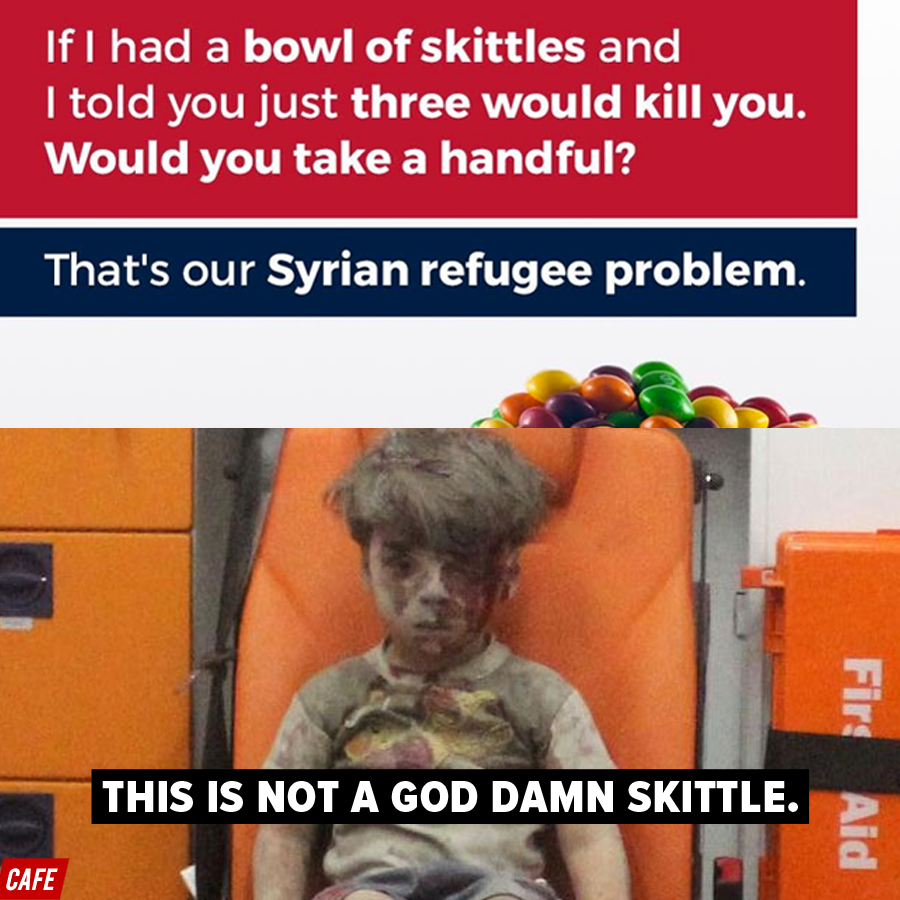 In the upper portion of the meme you have Trump Jr.’s Syrian Skittles analogy. In the bottom half you have a photo of a tragic little Syrian boy with the rebuttal, “This is not a God damn Skittle.”

Forget for a moment how insanely manipulative this photo of a dirty, blood-soaked, shell-shocked child is given the context. Over 70% of the Syrian refugees admitted to the U.S. and Europe so far have been young, fit, military-age men. Neither Trump Jr. nor anyone else referred to Syrian children like this as Skittles. Rather, those men who are most likely to be terrorists are being likened to poison candy. This is really so obvious that I feel ridiculous even pointing it out. Yet that’s what the Left has reduced us to.

Equally obvious, this debate need not be confined to a hypothetical Syrian Skittles analogy. To say those men who make up that ample majority of Syrian refugees in Europe have demonstrated ingratitude to their host countries is a gross understatement. They’ve marched in the streets of Europe. They’ve clashed with law enforcement and border guards in Europe. Arguably worse than carrying out terrorist attacks, Syrian refugees have systematically sexually harassed, assaulted, and raped thousands of European women. Knowing all this, having concrete examples to look to for what to expect, why would America want to follow in Europe’s footsteps?

And no, Syrian children may not have blown up any dumpsters in Manhattan or stabbed shoppers at a mall in Minnesota last weekend. However, ISIS did recently release videos of its children beheading prisoners.

Now tell me something. How are we going to respond when ISIS starts sending 10 and 12-year-old jihadists to stab holiday shoppers and spectators at sporting events? I think it’s safe to say Stephen Colbert and the folks at CAFE aren’t ready for that day. God forbid we ever have child soldiers or suicide bombers sent against us when even the slimmest chance that Syrian children were compared to Skittles gives Progressives aneurysms.

Regardless whether the Progressives can pull themselves together long enough to realize it, Trump Jr.’s Syrian Skittles analogy isn’t wrong.

We’ve had how many terrorist attacks in the U.S. and Europe over the past year? No, I’m not just making an argument here. It’s an honest question. I’ve literally lost count.

How many Western men, women, and children have been killed, wounded, or traumatized by Muslim men who were admitted to their countries as “refugees”? And how many jihadists entered the West as children a generation ago and have since had their violent Islamic faith activated?

No, wait. I’m sorry. Don’t focus on questions like that. Focus on the twisted caricatures of reality the Left feeds us. Ignore the ugly dystopia that same Left is further cementing with each passing day.

Neither Trump nor his eldest son want to kick Syrian refugee children to the curb. But that doesn’t matter. If mainstream media jokers like Stephen Colbert or obnoxious little pages like CAFE can divert attention away from the fact that Islamic jihadists just set off bombs in New York and New Jersey, they will. If they can distract us from terrorist knife attacks against casual shoppers at a Minnesotan mall this week, they will. And apparently, all it takes is a few wisecracks about racism and insensitivity.

Once Again, the Left Takes the Easy Way Out

Whom the gods wish to destroy they first make ridiculous.

Let’s face it. It’s just plain easier feigning outrage and making fun at a gross misrepresentation of a tweet than answering the valid concerns of those who oppose bringing Syrian refugees into the U.S.

Recognizing that bringing tens and hundreds of thousands of Muslims from the birthplace of ISIS into American towns and cities will lead to more terrorist attacks would be hard when you’re pushing for the admission of many more Syrian refugees. But, no. Feigning outrage is easier.

Fighting Islamists who mercilessly target innocent men, women, and children would be hard. Stopping those who want to destroy the West would be hard. It’s easier to ridicule and shout down your fellow Americans who have more courage. It’s easier making them into bogeymen so you don’t have to confront true evil.

Calling Progressive attitudes and policies to account for how they’ve made us far less safe would be hard. But go ahead and take the easy way out. Demonize Donald Trump Jr.’s Syrian Skittles analogy. Make microaggressions into the real crisis of our time. Feign outrage at a tweet with mere weeks til an historic Presidential election. That’s easier than admitting in the wake of three Islamic terrorist attacks that Donald Trump’s platform would make America more safe; Hillary Clinton’s would make it less-so.

Yet I cannot join you if that’s your choice. I cannot choose the easy path today knowing it will mean harder roads for my family and friends and countrymen tomorrow. Try making the Trumps into racists for opposing Islamic terrorism if you like. I choose instead to confront the real villains here. And the real villains are the violent Islamists who hide in plain sight, striking the defenseless without warning, provocation, or mercy.