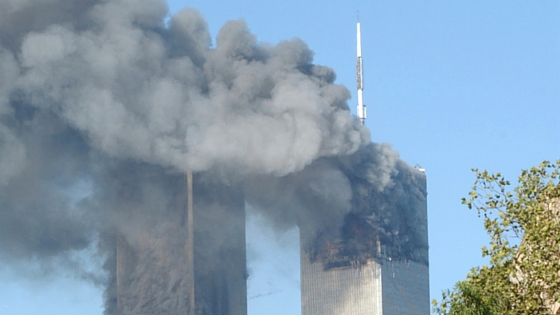 I was 15-years-old. Coming down the stairs to the living room, our TV was tuned to the CBS or NBC morning news. I remember the anchormen talking about how it appeared a small plane had collided with the World Trade Center in New York City. Then, on live TV, cutting short their speculation, a second plane struck. It was immediately clear this was no accident. This was a terrorist attack the likes of which America and the world had never seen.

And so, on the eleventh day of September for every one of the past 15 years, I’ve heard my fellow Americans repeat countless times, in words spoken and written with the utmost sincerity and sobriety:

While writing this post, my oldest son Josiah came over to me. I was sitting at the dining room table with my laptop open. Looking over my shoulder, he saw a photo on my screen of the twin towers of the World Trade Center – a huge smoking hole in the side of one of the towers where the first plane had struck. The second plane was flying in. The photo must have been taken mere moments before the second collision.

“What’s that?” My son asked me, pointing at the picture.

“Well, son…” I took a deep breath and my eyebrows went up.

What do I tell him?

For starters, I’ll tell him to honor the memory of the fallen.

I want to teach my children to look back on events like the horrific tragedy of 9/11 and honor the innocent victims who lost their lives, especially the first-responders who displayed the utmost courage as they rushed into what for many of them was certain death. They laid their lives down in order to evacuate their countrymen, even when those they were risking their own lives to save were complete strangers.

To those first-responders apply the words of Jesus,

“This is my commandment, that you love one another as I have loved you. Greater love has no one than this, that someone lay down his life for his friends.” 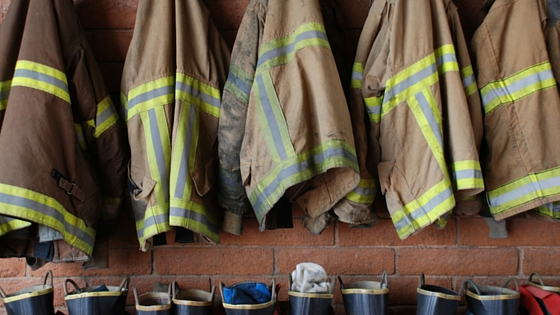 But what about terrorism?

It isn’t hard telling a child about heroic first-responders who gave their lives to save others. Though sad, that’s the easy part.

Explaining to your child the actions of terrorists – that’s the real challenge.

It’s hard! It’s unpleasant! I don’t want to be the one to burst their bubble. Not to mention how debatable it is whether even most adults understand what terrorism is. How can I expect my children to?

And yet I can’t help feeling the imperative to be honest with my son when he asks me flat out about an airplane flying into a skyscraper on one of the most pivotal days in the history of America and the world.

We can’t lie to our children, and we can’t shelter them from the truth – unless, that is, we’re willing to accept that children who don’t understand the way the world is are going to grow up into adults who lack both wisdom and the ability to handle difficulties or make good decisions in the midst of them.

Evil is real and so are its consequences.

“Bad guys” aren’t misunderstood victims. You don’t invariably become a bad guy because of poverty, lack of education, and white privilege. Bad guys are bad guys because their hearts are evil.

Consider what James, the brother of Jesus the Messiah had to say about the problem of evil, temptation, and difficult circumstances.

“Blessed is the man who remains steadfast under trial, for when he has stood the test he will receive the crown of life, which God has promised to those who love him. Let no one say when he is tempted, “I am being tempted by God,” for God cannot be tempted with evil, and he himself tempts no one. But each person is tempted when he is lured and enticed by his own desire. Then desire when it has conceived gives birth to sin, and sin when it is fully grown brings forth death.”

Later on in the book of James, we also read this gem:

This simultaneously explains the root cause of evil – including terrorism and war – and obliterates the notion that those who go through hard, trying times have an excuse for their wicked actions. Evil temptations are not the result of poverty, but of our selfish desires. Evil actions are the result of surrendering ourselves to those selfish desires.

We must address the root causes of terrorism.

The attacks of September 11, 2001 may stick out in my mind as the start, but this war Islamists are waging is much older than that. Unfortunately, there is currently no end in sight to this conflict. In all likelihood, our children and our children’s children will also be dealing with terrorism. With that in mind, how do we prepare ourselves, our families, and our society for the reality of a long-term struggle to maintain vigilance against terrorism?

Contrary to what you’ll hear from the likes of Marie Harf, Senior Advisor for Strategic Communications to U.S. Secretary of State John Kerry, the root cause of Islamists joining the Islamic State in droves is not lack of jobs and opportunity, but rather a fundamental difference of belief and conviction regarding good and evil.

These terrorists believe they as Muslims are good, and that conquering the world for Islam is very good; they believe everyone who is not a Muslim is evil, and that America and Israel are very evil. So of course it follows naturally that they believe their religion gives them not only license but a standing order as good Muslims to bring the whole world into submission to their god Allah, which requires sowing terror, death, and destruction among non-Muslims until they accomplish that goal.

Evil is the cause rather than the result of poverty, joblessness, and lack of education.

In order to conclude war with Islamists the likes of al-Qaeda and ISIS, we must make one of three choices:

Notice not one of these three choices involves alleviating poverty, joblessness, or lack of education for Islamists or their sympathizers. Unless by “education” we mean teaching them lessons on the battlefield.

We tried nation-building in Iraq and Afghanistan with what could at best be called mixed results. It sounds great in theory building schools, roads and infrastructure in hostile Islamist countries we’ve invaded. But what do you do when the hard-core Islamists hide in the hills and among the people, constantly attacking law enforcement and military personnel put in place to bring law and order and stability to the region? What do you do when everything you’ve rebuilt of their country is constantly being blown up by the insurgent jihadists who refuse to quit? 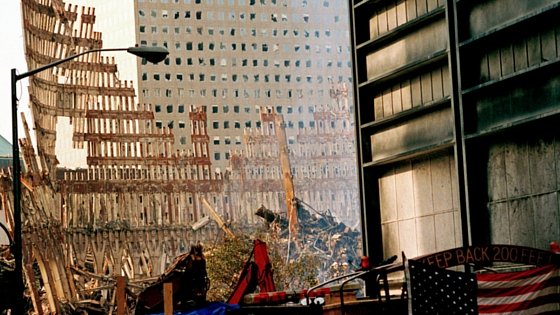 Blaming terrorism on poverty is like blaming drug addiction on poverty.

If you give money to either a terrorist or drug addict as if that’s going to help them, you’re being incredibly naive. The sad truth is they’re going to use the money you give them to feed their habit. Unlike giving money to a drug addict, the terrorist’s habit is much more others-centered. It finds it’s fix not in mere self-destruction and self-harm, but in killing, maiming, and terrorizing folks like you and me.

We don’t need a jobs plan for terrorists. The Islamists believe themselves already employed in the most noble occupation imaginable: conquering the world for their god. And even if you did start building factories to give them more peaceful and productive ways to pass the time, they’d either convert the machinery of those factories to produce weapons and other military supplies for their continued war against us, or else they’d just blow those factories up. Islamists are quite content to apply the “convert or die” principle to more than just non-Muslim persons.

What happens to an economy when all of its components not directly applicable to making war are constantly being blown to kingdom come? That’s right, poverty and joblessness.

What of education though? Well it’s very simple, really. The Islamists already have an education they’re quite content with. The first tenant is teaching themselves and one another to put the world under foot for Islam. The second tenant is hating America, Israel, and the West, and blaming all their problems on those they call infidels.

The terrorism that motivated Muslim hijackers to fly airplanes full of innocent people into buildings full of innocent people on 9/11 was fueled by the passions, desires, and covetousness of those men and the ones who sent them. Just so with the violence of the Islamic State that bathes the Middle East in blood as I write this. Islamic terrorism is caused by the passions, desires, and covetousness of the jihadists and those religious leaders preaching hatred and violence to them.

The jihadists see that America and Israel and the West are wealthy and ripe for plunder. All our wealth and property should belong to them, or so the Islamists suppose. They covet what we enjoy and so want to murder us so they can take what we have.

You need to understand this in order to effectively counter it. Islamists hate the freedoms enjoyed in America and the West because they’re jealous of anyone doing and having things forbidden them in Islamic society. They would never admit this, of course, instead preferring to point out the manner in which Western freedom is abused from time to time as justification for their righteous fury against us. But that’s what it is.

Cloaking the vices of greed, cruelty, lust, and covetousness is a religious fanaticism that blinds Islamists to their own wickedness and the darkness and evil in their own hearts. Instead of looking in the mirror at their own imperfections and sins, they project onto the wealthiest, most prosperous non-Muslims of the world all those insecurities they feel regarding their own unrighteousness, and blame us as the cause of their shortcomings.

And what is their hope for redemption? What were they taught is their best chance of obtaining grace from the divine Judge of all mankind they don’t truly know? Wage violent jihad against the unbelievers until the whole world is put under the boot of Islam. That’s what they’re told is their best shot at pleasing the deity. That’s why they fight against us with the utmost fervor without fear of being killed, since they have assurances that dying in such a manner guarantees their deliverance to Paradise. 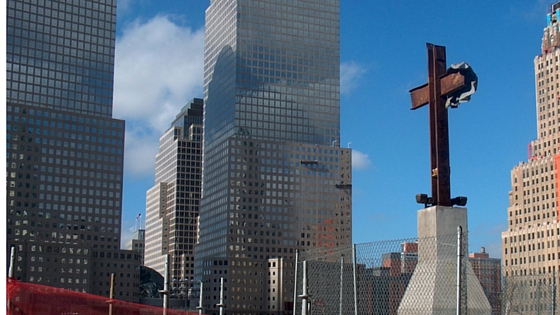 So what should we remember about 9/11?

In short, what I told my son Josiah this morning when he asked about the picture of a plane flying into the smoking towers of the World Trade Center is what I would tell you also. On 9/11 we remember there are evil men who plot our destruction and will stop at nothing to achieve it. Not only the events of September 11, 2001, but also countless other vile plans and acts of violence since then prove this.

On 9/11 we remember the decision which faced us 15 years ago still endures today. And admittedly, unfortunately, we should expect this same decision will face us 15 years from now. Will murderous threats and actions against innocent men, women and children paralyze and dissuade us? Or will we commit ourselves to confronting with iron will and unshakable resolve the evil men who make such threats?

As for me and my sons and my house, we will choose the latter. I pray you will stand with us.