In America today, we call it abortion. We content ourselves with allowing it to be a debatable issue. Everyone kicks the political football back and forth on whether it’s more of an outrage to kill unborn babies than it is to tell pregnant mothers not to. But why? For starters, we have accepted some wrong assumptions about a woman’s right to choose. 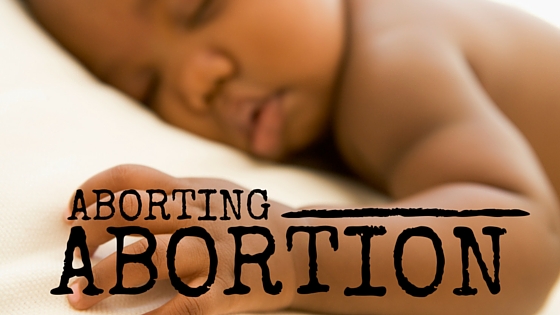 The phrase “a woman’s right to choose” is thrown out by pro-choice proponents as if it’s some sort of magic trump card. But when did we start putting the decisions of pregnant mothers in a moral vacuum as if the motives for those decisions are unquestionable, unassailable, or infallible?

When someone says they are pro-choice, what they’re really saying is that all the various choices a pregnant mother might make regarding her unborn child are equally good, equally wise, and equally valid. But does anyone, even the most ardent pro-choice adherent, really believe that consistently?

If the pregnant mother is a heroin addict or an alcoholic, and yet chooses to carry her baby to term and deliver that baby alive while still taking heroin or drinking copious amounts of booze throughout the pregnancy, does the pro-choice crowd still stand by the “woman’s right to choose” and “my body, my choice” rallying cries? For some reason when an infant is born alive, crying and suffering pain and damage before our eyes and ears in perpetuity as a direct result of a mother’s choice, the illusion of the infallibility of the mother’s choice is thrown out the window as the wicked folly it really is.

Another of the wrong assumptions about a woman’s right to choose is that it makes the smallest difference whatsoever to the viability or intrinsic value of the life of her unborn child whether or not the mother planned to get pregnant or wants to have and raise a child.

When someone attacks a pregnant mother who wants to keep her baby, and both the pregnant mother and the child in her womb die as a result of that attack, double homicide charges are brought against the assailant.

A whopping 38 out of 50 states have fetal homicide laws, according to NCSL.org, the website for the National Conference of State Legislatures. Though each of these laws look slightly different in each of the 38 states in which they’re in effect, they all essentially say that a fetus is considered a person, and killing them except by a legal abortion procedure is murder.

On the Federal level, you have the Unborn Victims of Violence Act, which was signed into law in 2004, stating that,

“If the person engaging in the conduct thereby intentionally kills or attempts to kill the unborn child, that person shall instead of being punished under subparagraph (A), be punished as provided under sections 1111, 1112, and 1113 of this title for intentionally killing or attempting to kill a human being.”

Yet the Unborn Victims of Violence Act also gives odd exceptions like this:

(1) of any person for conduct relating to an abortion for which the consent of the pregnant woman, or a person authorized by law to act on her behalf, has been obtained or for which such consent is implied by law;

(2) of any person for any medical treatment of the pregnant woman or her unborn child; or

(3) of any woman with respect to her unborn child.”

But what makes the unborn child a person when the mother wants it, and a non-person when she doesn’t? Do her feelings make the difference? Either the unborn child is a person or not, but we can’t have it both ways whenever we like for convenience sake. And since when are the feelings of the murderer the deciding factor in determining whether the killing of another human being is murder or not?

Can we have any doubt whether the unborn child is really alive? Surely not. If the child were not alive, there would be no point in an abortion. And since the child is alive, then obviously when the pregnancy is “terminated” that child is being killed, regardless your preference for some other more polite or sanitized way of saying it. The whole point of abortion is to end a life.

Having settled the question of whether abortion is killing, perhaps we doubt the full humanity of the fetus. Perhaps if the fetus is not human, then killing it is as morally neutral as killing a bug or rodent. But ask yourself – why wouldn’t the child growing in its human mother’s womb itself count as a human being? Surely, if the mother is a human woman, there isn’t anything else the unborn baby could be if not human.

Except in ancient mythologies, I have yet to hear of even one case where a human pregnancy resulted in the birth of something other than a human baby.

And if the unborn child is alive and a human being, and if that human being is killed in the womb, what else can that killing be called except murder? It doesn’t matter whether the method of killing has been sanctioned by the government and mother. This unborn human child hasn’t committed any crime, and hasn’t threatened anyone with violence. This little person growing in its mother’s womb has literally done nothing to deserve having its life taken from it, indeed is incapable of any act of malice against another person which would justify killing it.

So then we must conclude that abortion is a legally sanctioned and permitted murder which the U.S. government has said it will not prosecute, condemn, penalize, or oppose.

What’s worse is that our government, the government of the great United States of America, not only turns a blind eye to this wide-spread infanticide, but it facilitates it by funding an organization like Planned Parenthood, which according to The Daily Signal performs “roughly one out of every four abortions in America.”

How is it that our government gives Planned Parenthood $500 million a year, 41% of its annual revenue in financial year 2013-2014, and cannot bring itself to pull that funding even in light of the several undercover videos which have surfaced in recent weeks where Planned Parenthood executives are caught casually bartering on prices for the organs and body parts of murdered babies? What is wrong with our President and the Democratic Party in general that they cannot see the absolute horror and evil being promoted by their facilitation of and advocacy for groups like Planned Parenthood?

When it comes down to it, the leading causes for abortion are not related to the health of the mother, but rather unintended pregnancy. In other words, having and raising a child is deemed inconvenient and undesirable, so that child must die. Folks, it doesn’t get any more abominably selfish than that – killing your own innocent, defenseless, unborn child because you can’t be bothered right now with taking care of them.

Can you explain to me how this rationale for murder is acceptable before the child is born but not after? What if the mother thought she was ready to have and raise a child until she and her boyfriend or husband started losing sleep at night changing diapers and wiping tears? What if that mother didn’t realize how inconvenient a child would be until 3, 6, or 9 months after giving birth to it? If the mother suddenly has a change of heart when her child is one or two years old, and now she wants to go out on Friday nights and have drinks with her friends again like she used to, will the definition of “abortion” be expanded to allow her to crush and dismember her son or daughter then too?

Of course not! That would be barbaric! How dare I even suggest such a thing? Yet such is the logical conclusion for that way of thinking. That is where such a decision-making paradigm will take us. For a high profile example, consider poor two year-old Caylee Anthony, murdered in 2008. Who but a logically consistent, intellectually honest pro-choice advocate could defend the actions of her mother Casey, if indeed she is the one who murdered her own two year-old daughter? And there are, tragically, many other such examples like that.

We must realize that there really is no qualitative difference between murdering a child before its born and waiting to murder that child until they’ve grown into a toddler; there is only a quantitative difference based on time elapsed, or an emotional difference based on how attached everyone has become to the little boy or girl whose personhood cannot be denied once they’re outside the womb like it too often is when they’re still in gestation.

Please, I beg of you, speak up for the unborn. Let us cherish our children as blessings and stop treating them as a disease or curse to be cured or fended off.

Let us as a nation repent and beg the Lord God Almighty for restoration, revival, and mercy. That we as a culture and society have tolerated such despicable evil and injustice to continue unabated over forty years makes us ripe for terrible judgment, but let us pray it is not too late to turn back now and choose life again rather than death. Once and for all, let’s banish these wrong assumptions about a woman’s right to choose. Our future in so many ways depends on it.